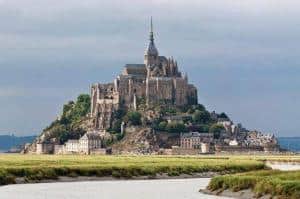 Le Mont Saint-Michel is an island commune in Normandy, France. The island has held strategic fortifications since ancient times and since the 8th century AD has been the seat of the monastery from which it draws its name. The structural composition of the town exemplifies the feudal society that constructed it: on top, God, the abbey and monastery; below, the great halls; then stores and housing; and at the bottom, outside the walls, houses for fishermen and farmers.

Many writers have tried to define the “Marvel of the Occident”, some say that it is to the sea what the pyramid of Keops is to the desert, some describe it as an imaginary manor-house, stupefying as a dream palace, others say that is is not dry land and yet not the sea. Surrounded by the sea with one of the highest tidal ranges in the world the Mont St. Michel is simply unique.

On the Mont St. Michel, the tour begins with a guided visit of the Abbey at the beginning of the 8th Century and that became a major cultural and pilgrimage centre during the middle ages . You will admire the Romanesque Church, the Gothic Marvel with the monk’s Cloisters and Refectory, the Knights Room, the Guest Room, the Undercroft, the Refectory, as well as various chapels

For booking this tour, please contact us at : contact@mydriverparis.com